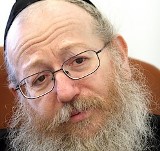 Negotitaions between various factions of Yahadus HaTorah-United Torah Judaism (UTJ) has resulted in an attempt to renegotiate the party’s coalition agreement with the Likud and swap the Health portfolio for a deputy ministry portfolio in the Finance Ministry. According to sources in Ger, MK Yaakov Litzman, who was offered the health portfolio by the Likud but does not want it, hopes to exchange it for a position which he views as more attractive.

Health is viewed by chareidim as a portfolio that does not particularly advance their interests. The health minister is also more liable to be exposed to public criticism.

Finally, senior health officials are demanding that a full-fledged minister be appointed.

Since 1953, when Agudas Yisroel MK Rabbi Yitzchok Meir Levine stepped down as Social Affairs Minister, Agudas Yisroel and Degel HaTorah have refused to allow its MKs to serve as ministers.

Instead, UTJ MKs serve as deputy ministers without a minister senior to them. They in effect have most of the powers of a minister without having to sit in the cabinet, which may make decisions that contravene halacha.

A source close to Rabbi Litzman said, “The health system could wait until after the chag [of Pesach]. Nothing will happen if a minister is not appointed in the next week.”

Negotiations among various groups within UTJ has intensified in recent months. While the relationship between Degel Hatorah and Agudas Yisroel has always been tense, the situation has been exacerbated by vying amongst various chassidishe kegillos that make up Agudas Yisroel fighting for control.

In recent decades, Ger has been the dominant voice in the party. However, in the past year, a coalition of smaller chassidishe kehillos, known as Shlomei Emunim, which is represented by MK Meir Porush, has challenged Ger’s hegemony.

Last week, in an internal UTJ vote that decided the MKs’ hierarchy for the purpose of distributing portfolios and government positions, Meir Porush voted against Yaakov Litzman and in favor of Degel Hatorah’s MK Moshe Gafni for the coveted Knesset Finance Committee chairmanship.

Porush’s vote was seen as an act of revenge after Ger supported the secular Nir Barkat against Porush in November’s Yerushalayim Municipality elections.

Meanwhile, Litzman, who lost the finance committee chairmanship, a position which has decisive control over budget matters, ended up with the “second best” position – the health portfolio.

According to a Gerrer source, Litzman wants a deputy minister position in the Finance Ministry.

However, Yaakov Cohen of Shas has already been appointed deputy minister in the Finance Ministry, and Shas is likely to strongly object to appointing Litzman as a second deputy there.

Another option that Litzman has is to convene a larger body of Agudas Yisroel representatives and force Porush to support Litzman, his fellow Aguda MK and not Degel Hatorah’s Gafni.

Meanwhile, MK Menachem Moses, a Vizhnitzer chossid who has experience managing hospitals, is waiting for Litzman and Ger to decide what to do with the Health Ministry. Rabbi Moses, as e reported here on Matzav.com, has shown interest in receiving the portfolio.

Netanyahu told the cabinet at the beginning of the meeting that he would soon name someone to head the health system, but declined to say who this would be or what position he or she would hold.

“I will soon appoint a head of the health system so there will be a clear address,” he said.