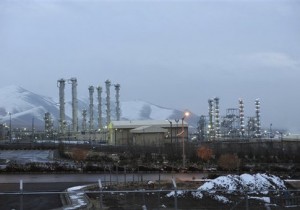 The United States and other global powers are helping Iran to update and reconstruct a nuclear reactor that has been suspected of helping the Islamic Republic produce enough material for a potential nuclear weapon, according to regional reports and statements from the State Department.

The United States’ goal is to work with Iran to refit the reactor in such a way that it can no longer produce weapons grade material.

However, Iran maintains that the United States and other partner nations will soon provide “advanced equipment” for the reactor, which is located near the Iranian industrial city of Arak.

A spokesman for the Atomic Energy Organization of Iran, the Islamic Republic’s main nuclear regulator, said on Tuesday that the United States and several other nations would begin supplying Iran equipment so that it can modernize the nuclear reactor.

“Four countries of the [nuclear negotiating team] have accepted to cooperate with Iran in supplying advanced equipment for the (Arak) reactor and different other issues,” Behrouz Kamalvandi, a spokesman for the Iranian nuclear authority, said Tuesday.

Kamalvandi said that while Iran could complete the modernization on its own, “it has sought the world powers’ assistance to accelerate the job.”

The issue of Arak was a key negotiating point during nuclear talks that recently produced an agreement aimed at curbing the Islamic Republic’s nuclear ambitions.

“We have had negotiations on this issue in Vienna and recently, some consultations have been made by the Iranian foreign ministry officials in China,” Kamalvadi was quoted as saying.

The Obama administration announced that it would assist Iran is rebuilding the Arak reactor when the nuclear deal was implemented in late October.

Nuclear experts from the Department of Energy will be tasked with helping to accomplish this goal, according to Secretary Ernest Moniz.

“Under the [Joint Comprehensive Plan of Action], one step that Iran must take is to redesign its Arak Heavy Water Research reactor, including removing its existing calandria and rendering it inoperable,” Moniz said in an Oct. 18 statement. “To support this effort, the Department of Energy’s nuclear experts will lead the U.S. effort to work with our P5+1 partners and Iran to modernize the Arak reactor, effectively eliminating a potential source of weapons-grade material.”

“In addition to co-chairing the Arak Modernization Working Group, the Department of Energy’s technical experts will also continue to support President Obama, Secretary [John] Kerry, our P5+1 and EU partners, and the [International Atomic Energy Agency] through technical advice and expert consultations on nuclear matters,” he said.