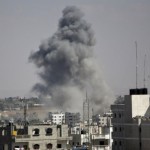 US State Department Spokesperson Jen Psaki delivered an unusually strong condemnation of an Israeli strike near a Gaza school being used as a shelter in Rafah, saying that the US was “appalled” by the “disgraceful shelling outside an UNRWA school.”

The shelling, which left 10 people dead according to Palestinian reports, drew harsh condemnations worldwide, including from the United Nations, London and elsewhere, amid growing international criticism of the 27-day-long operation.

The IDF issued a statement saying that forces had targeted three Palestinian Islamic Jihad terrorists on board a motorcycle in vicinity of an UNRWA school in Rafah, and added that “the IDF is reviewing the consequences of this strike.”

However, the US said that the presence of combatants did not justify targeting areas near the school.

“The suspicion that militants are operating nearby does not justify strikes that put at risk the lives of so many innocent civilians,” Psaki said.

The US statement noted that the school was, at the time, sheltering some 3,000 displaced persons, and that “at least 10 more Palestinian civilians were tragically killed.” Although the statement noted that the shells struck outside of the United Nations Relief and Works Agency for Palestine Refugees school, Harf’s statement grouped the incident together with other strikes at UN facilities.

“The coordinates of the school, like all UN facilities in Gaza, have been repeatedly communicated to the Israeli Defense Forces,” the statement emphasized.

“UN facilities, especially those sheltering civilians, must be protected, and must not be used as bases from which to launch attacks,” Psaki said.

Psaki reiterated previous calls for “full and prompt investigations” of shelling at or around UNRWA facilities and said that “Israel must do more to meet its own standards and avoid civilian casualties.”

According to UNRWA officials, their facilities are currently sheltering some 250,000 Gazans seeking to flee active combat zones. Israel has been accused of hitting some UN facilities during the almost month-long escalation in Gaza, but UNRWA officials have also acknowledged that rockets were discovered stored in at least three of the organization’s schools.

“We continue to underscore that all parties must take all feasible precautions to prevent civilian casualties and protect the civilian population and comply with international humanitarian law,” Psaki said.