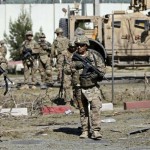 Ghani’s predecessor, Hamid Karzai, had distanced himself from the U.S. and resisted having American troops stationed there. Read more at AP.