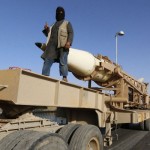 America is spending up to $10 million a day to fight the Islamic State (ISIS) group’s militants in Iraq and Syria, Defense Secretary Chuck Hagel estimates – a ballooning expense likely to put the squeeze on a Pentagon budget already under federal spending caps.

“We’re working now with the appropriate committees on how we go forward with authorizations and funding.”

Hagel’s new estimate of $7 million to $10 million a day for the cost of U.S. operations in Iraq and Syria raises the previous price tag of $7.5 million a day when the campaign was limited to Iraq, the Examiner reports.

The Examiner points out money for the fight against the Islamic State group currently comes from a war-funding measure know as overseas contingency operations – which also funds the war in Afghanistan. Congress allowed for $85.2 billion for that account in fiscal 2014, and the administration has asked for $65.8 billion in fiscal 2015, the Examiner reports.