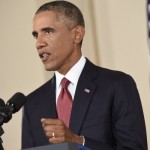 In what appears to be the first offensive airstrike against ISIS, the United States hit militant positions near Baghdad on Monday.

The U.S. Air Force has been striking ISIS targets since early August, but only to protect strategic areas and allow humanitarian assistance to enter Mount Sinjar.