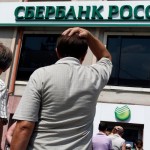 Today, the U.S. Treasury Department announced even more sanctions against Russia for its intervention in Ukraine, most notably targeting the country’s largest bank, Sberbank. U.S. individuals and companies are now barred from dealing in any debt six Russian banks issue with maturity longer than 30 days. It also blocked the assets of five Russian state-owned defense technology firms.

It also added to sanctions against Russian energy companies Gazprom Neft and Transneft, which are now blocked from issuing new transactions with debt more than 90 days.

“The United States, in close cooperation with the European Union, will impose ever-increasing sanctions that further Russia’s isolation from the global financial system unless Russia abandons its current path and genuinely works toward a negotiated diplomatic resolution to the crisis,” said Under Secretary for Terrorism and Financial Intelligence David S. Cohen. Read more at The Washington Examiner.