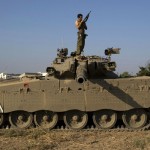 The U.S. State Department released photos on Sunday that prove Russia fired rockets into Ukraine, according to officials. The satellite images are included in a four-page memo tracking strikes from Russia into Ukraine between July 21 and July 26. The photos, which are from the U.S. Director of National Intelligence, show blast marks from where the rockets were launched to crater marks where they landed.

Officials say the photos prove that Russia has been firing rockets more than seven miles into eastern Ukraine. Read more.