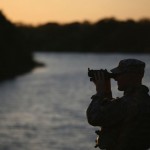 U.S. officials refuted claims that ISIS would come into the U.S. over the Mexican border. “We see no specific intelligence or evidence to suggest at present that ISIL [ISIS] is attempting to infiltrate this country though our southern border,” said Homeland Security Secretary Jeh Johnson on Wednesday. Senator Marco Rubio of Florida and Texas Governor Rick Perry have both suggested terrorists may try to enter the nation via the Mexican border.

“We’ve seen nothing to indicate there is any sort of operational effort or plot,” said Matthew Olsen, the head of the National Couterterrorism Center, who testified with Johnson at the House Committee on Homeland Security. Read more at Huffington Post.