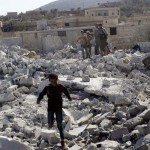 After reports that more than a dozen civilian women and children were killed during a U.S. airstrike in Syria last week, the White House has officially acknowledged they loosened the strict standards put in place last year by President Obama.

The policy banned any U.S. drone strikes unless there was “near certainty” civilians would not be harmed. Those standards no longer apply to Syria and Iraq, because the White House says the “near certainty” standard only applied “when we take direct action ‘outside areas of active hostilities,'” a spokesperson for the National Security Council said.

“That description-outside areas of active hostilities-simply does not fit what we are seeing on the ground in Iraq and Syria right now.” The attack in Syria was directed at the al-Qaida-linked  Khorasan group that was allegedly planning terrorist attacks on the West. Read more at Yahoo News.