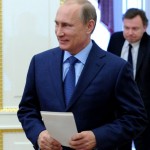 Senior U.S. intelligence officials said Tuesday they have no direct evidence of Russian involvement into the shooting down of Malaysia Airlines Flight 17.

Russia may have been involved in training and aiding these separatists, but the rebels are believed to have fired a surface-to-air missile on their own.

The targeting of the jet appears to have been by mistake, they said. The officials don’t know who fired the missile or whether Russians were present at the launch.

An official did confirm that Ukraine was not involved, saying “We’re confident no Ukrainian air defense systems were in range of the launch site or the crash site.”

Deputy National Security Advisor Ben Rhodes said Tuesday on CNN that “We do think President Putin and the Russian government bears responsibility for the support they’ve given the separatists… We’re going to continue to pull the thread on this case to determine exactly who do we believe fired that missile.” Read more.