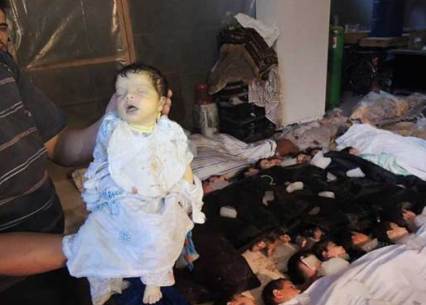 American intelligence had evidence that preparations were underway for a chemical weapons attack as early as three days before the strike that targeted Damascus suburbs, killing 1,429 last Wednesday, senior administration officials revealed on Friday.

Speaking as a US intelligence report about the August 21 attack was released to the public, the officials said the death toll included 426 children, and noted that the numbers were likely to rise. The anxiously awaited report was based on human, signals, geospatial and open source intelligence, and officials said that they had “high confidence” that the regime of Syrian President Bashar Assad was behind the slaughter.
The document, cited by Secretary of State John Kerry in his Friday speech accusing Assad of committing a crime against humanity, points to a chain of command stretching from Assad as a decision-maker to the chemical weapons units believed to have launched the assault. The chemical weapons program in Syria, intelligence officials said, was “tightly commanded and tightly controlled,” implying that the odds that, as some claim, opposition members could have launched the attack were slim.