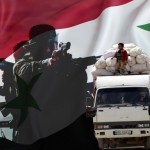 While U.S. warplanes strike at the militants of the so-called Islamic State in both Syria and Iraq, truckloads of U.S. and Western aid has been flowing into territory controlled by the jihadists, assisting them to build their terror-inspiring “caliphate.”

The aid – mainly food and medical equipment – is meant for Syrians displaced from their hometowns, and for hungry civilians. It is funded by the U.S. Agency for International Development, European donors, and the United Nations. Whether it continues is now the subject of anguished debate among officials in Washington and European. The fear is that stopping aid would hurt innocent civilians and would be used for propaganda purposes by the militants, who would likely blame the West for added hardship.

There is no evidence that the militants of the Islamic State, widely known as ISIS or ISIL, feel any sense of disgrace or indignity (and certainly not gratitude) receiving charity from their foes.

Quite the reverse, the aid convoys have to pay off ISIS emirs (leaders) for the convoys to enter the eastern Syrian extremist strongholds of Raqqa and Deir ez-Zor, providing yet another income stream for ISIS militants, who are funding themselves from oil smuggling, extortion, and the sale of whatever they can loot, including rare antiquities from museums and archaeological sites.

“The convoys have to be approved by ISIS and you have to pay them: The bribes are disguised and itemized as transportation costs,” says an aid coordinator who spoke to The Daily Beast on the condition he not be identified in this article. The kickbacks are either paid by foreign or local nongovernmental organizations tasked with distributing the aid, or by the Turkish or Syrian transportation companies contracted to deliver it.

Read the full story at The Daily Beast.