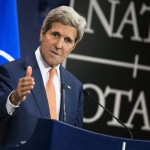 In a meeting with defense and foreign ministers from 10 key NATO allies, Secretary of State John Kerry outlined plans to fight the increasingly out of control threat of ISIS in the Middle East.

Kerry said the U.S. was forming a “core coalition” to prevent the militants in Iraq from gaining more territory.

There’s a need to “bolster the Iraqi security forces and others in the region who are prepared to take them on, without committing troops of our own,” he said. “Obviously I think that’s a red line for everybody here: no boots on the ground.” Read more at The Guardian.