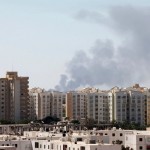 Personnel from the U.S. embassy in Libya were evacuated early on Shabbos morning with the help of military warplanes and spy aircraft, according to the Pentagon.

“At the request of the Department of State, the U.S. military assisted in the relocation of personnel from the U.S. Embassy in Tripoli, Libya on Saturday, July 26,” Pentagon press secretary Rear Adm. John Kirby said in a statement. “All embassy personnel were relocated, including the Marine security guards who were providing security at the embassy and during the movement.”

Tripoli has grown increasingly unstable in recent weeks as clashes between armed militias have taken over the streets and airport, killing many and wounding dozens. Read more.