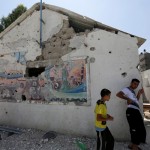 The United States is condemning Israel’s shelling of a U.N. school in the Gaza Strip that was sheltering displaced Palestinians.

It’s the sharpest criticism the U.S. has leveled at Israel over the more than three weeks of fighting between Israel and Hamas militants in Gaza.

White House spokeswoman Bernadette Meehan says the U.S. is also “extremely concerned” that thousands of Palestinians aren’t safe in U.N.-designated shelters in Gaza even though Israel’s military has told them to evacuate their homes. Gaza health officials say 15 people were killed Wednesday when Israeli tank shells slammed into the school.

Meehan says the U.S. also condemns those responsible for hiding weapons in U.N. facilities in Gaza. She says the escalation shows the need for a cease-fire as soon as possible.