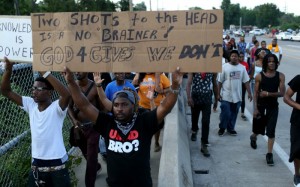 It may not look like it, but the federal investigation into Michael Brown’s death is going well, says the top federal prosecutor involved. Richard Callahan, U.S. Attorney for the Eastern District of Missouri, says FBI agents are interviewing witnesses in the area and sharing the information with St. Louis County prosecutors.

What’s not going well is all the leaks to the press. “The modern 24-hour news cycle hampers law enforcement’s ability to conduct a successful investigation,” Callahan said. There aren’t any plans to reveal findings of the investigation to the public before the case is seen by a St. Louis County grand jury in the coming weeks or months.

The jury examining these findings will decide whether or not to indict Officer Darren Wilson. If they do not indict Wilson, the investigation’s results will become public under Missouri law. Read more at Time.