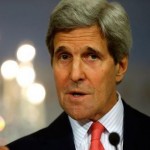 The United States this evening condemned the non-stop rocket fire by Hamas terrorists against Israel.

Secretary of State John Kerry spoke to Prime Minister Bibi Netanyahu to night in light of the heavy rocket fire. Kerry told Netanyahu to “act with restraint” in responding to Hamas’ pounding of southern Israel.