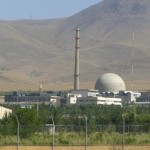 U.S. officials expressed pessimism going into nuclear talks with Iran in New York as a wide range of gaps remain between the two sides, especially over Iran’s uranium enrichment program.

“Coming into New York, I think many of us were not very optimistic,” a senior Obama administration official said Thursday, adding that “everyone has come here to go to work.”

The latest round of nuclear talks between Iran and the P5+1 powers-U.S., U.K., France, Germany, China, and Russia-is being held on the sidelines of the United Nations General Assembly in New York. Negotiators are attempting to reach a permanent deal on Iran’s nuclear program by the Nov. 24 deadline, as stipulated in an interim nuclear deal signed last year and extended in July.

The P5+1 has said that it would allow Iran to retain 5-percent uranium enrichment capability, while Iran maintains that it wants that number at 20 percent, which nuclear experts say is just below the threshold of nuclear weapons breakout capability.

Israel has said that any final nuclear deal must include Iran dismantling its entire program and not having any enrichment capability.