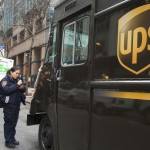 Around 8 a.m. at a cavernous warehouse outside Pittsburgh recently, about four dozen delivery drivers for United Parcel Service got their first look at the scheduled drop-offs for the day.

Prepping for roughly nine-hour shifts with anywhere from 50 to 150 stops, it could have been – and, until recently, was – a daunting start, as drivers had to calculate how best to juggle the day’s load while negotiating Pittsburgh-area traffic snarls such as bridges, tunnels and sudden road closures.

But as the drivers did their stretches and huddled for a morning pep talk, they stopped to consult a computer screen. It told them precisely what route to take to make each delivery and what time they would get there.

UPS has been expanding its use of the technology that it hopes could save 100 million miles a year from the shipping company’s treks around America’s cities and neighborhoods. Big shippers such as UPS and FedEx Ground have been embracing tracking data as a way to cope with and grow with the prolonged boom in online shopping, even as they work to give customers more specific options for home delivery.

“As technology has evolved, so has what we scan,” said Kevin Koken, vice president of the FedEx Ground’s eastern region, which covers the New England and Mid-Atlantic areas. He noted that FedEx developed the first bar code used for shipping purposes in 1985.

Online sales have grown at a faster rate than those from brick-and-mortar stores, and sales this November and December are expected to follow that trend, according to the National Retail Federation. The Washington, D.C., trade group expects online sales to rise between 6 and 8 percent to as much as $105 billion, compared with retail stores growth of 3.7 percent to $630.5 billion.

The shift hasn’t always gone smoothly for delivery companies – just two years ago, stories about delayed Christmas deliveries grabbed headlines. This year, FedEx expects a record 317 million shipments between Black Friday and Christmas Eve across its global network, a 12.4 percent increase in seasonal volume. UPS is forecasting a Thanksgiving through December delivery volume of more than 630 million packages, up more than 10 percent from 2014.