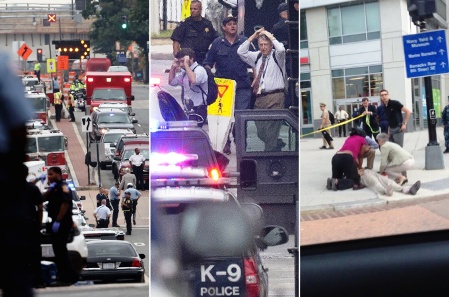 [Photos and links below, WTOP live here.] At least 12 people, including a shooter, are confirmed dead in a rampage at the Washington Navy Yard, Washington, D.C., mayor Vincent Gray said today. Officials continue to search for two “potential” additional suspects in the case, D.C. police chief Cathy Lanier said, although other officials say the evidence indicates only one gunman was involved.

PHOTOS: At the scene of Navy Yard shooting

Officials said they still do not know a motive for the shooting but that they do “not have any evidence to think” that it was related to terrorism.

“We potentially have two other shooters that we have not located,” Lanier said in a brief news conference outside the gates to the sprawling base.

Lanier confirmed that one shooter had been killed, but said that police were still searching for a white male last seen about 8:35 Monday morning wearing khaki military-style clothes and a beret and carrying a handgun, and a black male about 50 years old, wearing a military-style olive, drab uniform who may have been carrying a rifle.

Lanier said though the men were wearing military-style clothes, they may not actually be members of the military. The investigation is still “very active,” she added, asking residents to stay out of the area and in their homes while police search the area.

“As far as we know, this is an isolated incident,” Gray added, saying that no other military installations appeared to have been involved.

President Obama, speaking at the White House, praised the victims as “patriots” who “know the dangers of serving abroad” but faced “unimaginable violence they wouldn’t have expected at home.” He promised that federal and local law enforcement officials would work together to investigate the shooting.