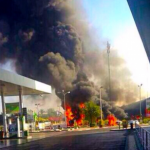 As many as 25 percent of Hamas rocket attacks against Israel in the current Israel-Hamas war don’t make it out of Gaza and strike civilians inside the coastal enclave, Algemeiner Editor Dovid Efune asserted in an interview on Real News TV on Friday.

Asked about an explosion at a UN school on Thursday, which killed at least 15, according to Gazan reports, Efune pointed to the IDF’s claim that the source of the munition may have been Hamas.

Efune said, “This is really a watershed moment, which brings up a fundamental issue which is never discussed in the mainstream media and that is this: you have hundreds and thousands of rockets that are being shot out of Gaza. In our estimations, at least 25 percent of those rockets do not make it into Israel and fall short into Gaza.”

“You have the IDF saying the other day that they had at least 100, they showed a map of rockets that fell inside of Gaza. And remember, in Gaza there are no air raid sirens. All of the bunkers are used absolutely by the Hamas terrorists, where they don’t allow civilians to go inside. There’s no warning and they cause tremendous damage. On the ground though, you have the Hamas guys… and the UN who… back them up and they come in and blame everything on Israel. Everything, all the damage.”

Asked about what steps Israel is likely to take next in its Gaza offensive, Efune said that the Israeli people are calling for the threat of Hamas rockets and terror tunnels to be eliminated.

“In terms of whats gonna happen in Gaza and how far Israel can go, there’s no doubt that the Israeli public is not willing to live with this anymore,” he said. “Its become kind of a biennial event where their lives are in disarray. And you’re dealing with a responsible democratic country with [an] elected government and they have to, they have to, do what they can to protect the citizens. They do not have any choice in this matter. Having said that, there’s a lot of international pressure led by Secretary of State Kerry for Israel to pull back.”

On the role of the United Nations in the conflict Efune said: “The UN is a very unfortunate disaster. Complete, complete disaster. You have a situation there where the worst human rights violators in the world are running the show at the Human Rights Council. So, you basically have murderers who are judging themselves. It’s ridiculous. It’s preposterous. But the biggest problem is that the UN is really protecting the biggest human rights offenders. It’s clear that Hamas is using human shields; it’s clear that Hamas, which is a terrorist organization, a theocratic government, is holding its population hostage. Those are the violations that the UN has to be focused on and they’re letting Hamas off scot-free, completely.”