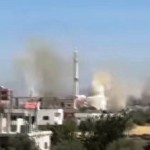 As Syria has plunged into civil war and UN peacekeepers have become targets of al-Qaeda-linked rebels, the UN observer force has begun to fall apart. The 1,200-strong force is now mostly huddled inside Camp Ziouani, a base on the Israeli side of the Golan Heights. Its patrols along the border have all but ceased.

“Their mandate is just not relevant anymore,” said Stephane Cohen, a former Israeli military liaison officer with UNDOF. “They are there to oversee an agreement between two countries – Israel and Syria – and in practice there is no Syria anymore.”

Dolan Abu Saleh, the mayor of Majdal Shams, the largest of four Druse towns on the Israeli side of the Golan Heights, noted: “The truth is that people are happy to be living under Israeli rule and the Golan today is Israeli.”

Mala Bakhtiar, military supervisor of the Kurdish peshmerga forces in Khanaqin in northeastern Iraq, spoke openly of comprehensive Iranian involvement in logistics, intelligence-sharing and provision of military equipment to Kurdish troops. “They gave us rockets, cannons, maps,” he said. He also confirmed the presence of Iranian Revolutionary Guard advisors who, he said, “were very helpful” in the battle to dislodge Sunni extremists from the nearby town of Jalawla and vicinity.

It was Iranian-backed Shiite militias that helped the Iraqi military thwart the extremists’ rampage toward Baghdad in June and July. The main Iraqi Shiite militia coordinating with the Iraqi forces in the south is the Badr Brigade, which has a “long history of being trained by Iran,” noted Hamid Reza Taraghi, a Tehran-based analyst.

Syria has revealed a previously undeclared research and development facility and a laboratory to produce the poison ricin to the Organization for the Prohibition of Chemical Weapons (OPCW), diplomatic sources said. The new disclosures came as part of an ongoing review of “discrepancies” in Syria’s initial OPCW declaration.