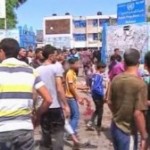 On January 6, 2009, during Operation Cast Lead, the BBC (and every other news outlet) reported:

At least 40 people were killed and 55 injured when Israeli artillery shells landed outside a United Nations-run school in Gaza, UN officials have said.

A number of children were among those who died when the al-Fakhura school in the Jabaliya refugee camp was hit, doctors at nearby hospitals said.

Some media said at the time that as many as 46 were killed. The UN was in the forefront of telling those number to the media.

By the time the Goldstone Report came around to the issue, the claims were downsized a bit to 24 people killed, and he admitted that the school wasn’t hit, but that Israeli fire hit outside the school. And Goldstone even admitted that he didn’t verify the figure of 24, but just accepted it from testimonies – testimonies that included known Hamas members.

Of course, at this point, people only remembered the initial lurid headlines.

The Goldstone report wasn’t accurate either. From combing through the casualties listed by PCHR, the dates and locations, double checking the names of the victims with known terrorists, and reports from witnesses who Goldstone didn’t bother to find, it is certain that there was serious mortar fire originating from the street outside the school and that at least three and possibly as many as 10 terrorists were killed in the Israeli retaliation.

That is much different from the initial, lurid, and utterly false headlines. But the truth didn’t get reported by any major media outlet.

Ten Palestinians were killed on Sunday after Israeli shells hit a UN school in Rafahwhere thousands of people were sheltering from the ongoing Israeli offensive.

At least 30 were injured in the strike, according to Ministry of Health spokesman Ashraf al-Qidra.

A United Nations school was attacked in southern Gaza on Sunday, killing at least 10 and injuring more than 30, as Israeli shells continued to bombard southern Gaza, hours after President Benjamin Netanyahu vowed that Hamas would pay “an intolerable price” for its assaults.

Was a school hit?

As Israel Matzav reports, some media are mentioning a slightly different story. From ITV:

A deadly air strike near a United Nations-run school in Gaza was targeting a vehicle outside the front gate of the school, a witness has told ITV News.

Most of the most recent reports are already walking back from the charge that the school was hit, since it wasn’t. It remains to be seen if the reporters at the scene will actually try to ferret out the truth. Given the false initial reports, the chances for that are pretty small.

It will take some time to find out the facts, but as usual, reporters are rushing into quote known liars like UNRWA spokespeople and the Gaza Ministry of Health without any mention of their unreliable record – just as they did in 2009.

If the IDF targeted a car, and knowing that the IDF usually uses fairly small missiles to hit cars, it seems quite possible that the car was carrying explosives or rockets that went off and ended up hurting and killing people outside the school.

The media laps it up, knowing that the IDF takes hours to investigate and make a statement because of the complexity of researching real facts rather than the ease of parroting ridiculous charges from known liars.

ELDER OF ZIYON – THE ALGEMEINER JOURNAL