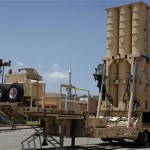 The Israel Missile Defense Organization and the U.S. Missile Defense Agency conducted an intercept test of the Arrow 2 interceptor missile on Tuesday morning, September 9. The test, which took place over the Mediterranean Sea, oversaw the capabilities of the Arrow 2, the latest version of the air defense system designed to stop long-range missile threats, alongside the Iron Dome.

“An Arrow 2 missile was launched and performed its flight sequence as planned. The results are being analyzed by program engineers,” the Israel Defense Ministry released in a statement.

A senior official at the Ministry of Defense stated that a Rafael-produced Sparrow missile had been fired from the Mediterranean Sea at Israel, and the system detected and successfully intercepted the missile. “At the correct time, it fired an Arrow 2 interceptor,” the official said.

Israeli media reported that Ashdod residents witnessed the test operation, which simulated a rocket attack from Iran on southern Israel.

The test results have no effect on the Israeli operational systems capability to cope with the existing threats in the region according to the Defense Ministry. This test was an improved version of the joint U.S. – Israel AWS, intended to counter future enemy missile threats. Previous tests were conducted in 2009 and 2011.

Russian radar picked up on Tuesday’s joint U.S.-Israel missile test, according to Russian news source, RT. Military radar in southwest Russia detected the test, with a Russian defense spokesman stating their radar had monitored that the missile’s fall 300 kilometers north of Tel Aviv into the sea.

In January, the Defense Ministry together with the US Missile Defense Agency held successful trial of the Arrow 3 anti-ballistic missile system, aimed to intercept missiles outside the earth’s atmosphere. According to designers, the Arrow 3, which will be completed in 2016, would be able to shoot down incoming Iranian rockets over Iraq, way before they reached Israeli or Jordanian-controlled airspace.

The primary contractor for the integration and the development of the Arrow Weapon System is the Israel Aerospace Industries, in conjunction with Boeing, Elta, and Elbit-Elisra.