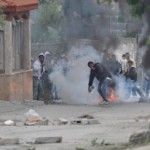 The Tel Aviv-born Tuvia Tenenbaum spent time with the various left-wing Israeli and foreign agitators in the West Bank and asked them to educate him about the plight of the “Palestinians,” according to Prof. Seven Plaut, of the Faculty of Management at the University of Haifa, speaking with The Algemeiner.

Tenenbaum “turned the results into a book, ‘Catch the Jew,'” a “hilarious and at the same time highly revealing [account] of the sorts of propagandists operating to undermine Israel and provide disinformation to the media. A chapter of his new book is reprinted in this past weekend’s Makor Rishon,” newspaper, Plaut noted.

“Much of the chapter deals with Tenenbaum’s meetings and travels about the West Bank with Rabbi Arik Ascherman, head of the ‘Rabbis for Human Rights,'” group, which Plaut characterized as “a far-leftist anti-Israel propaganda NGO.”

In a parallel video report aired on Israel’s Channel 2 News Friday evening on the book, Tenenbaum said, “The Europeans aren’t really familiar with the Middle East dispute and they do not investigate. They are coming out of every hole here. They don’t want to help, but rather to catch the Jew doing something bad. It comes from hatred.”

Translating from the report, noted pro-Israel blogger, Carl in Jerusalem, of Israel Matzav, wrote, “From the beginning, ‘Toby’ joined a group of young Italians who learned about the dispute in Shechem (Nablus) and in Israel, with funding from the European Union. But the Israeli guide, Itamar Shapira – the brother of the pilot Jonathan Shapira who refused orders and became an extreme Leftist activist – presented himself to the group as a ‘former Jew’ and said harsh things against Israel.

“During a tour of Yad Vashem, Shapira chose to focus specifically on stories of the massacre at Dir Yassin [the Jenin lie of the 1948 War of Independence. CiJ] and told the young Italians that it’s necessary to impose boycotts and sanctions on Israel because ‘we have to stop an additional Holocaust.’ Shapira was fired in the past from Yad Vashem after he compared the Holocaust to the Naqba [the Palestinian characterization of the creation of the State of Israel as a catastrophe. CiJ], but today he leads private groups there.

“The Palestinian guide who accompanied the group was Ataf Abu Rob, a Palestinian journalist and investigator for B’Tselem who is responsible for several stories published by the [extreme Leftist Haaretz] journalist Gideon Levy. Abu Rob told ‘Toby’ that the Holocaust is ‘a lie. I don’t believe it.’

“The senior Fatah commander Jibril Rajob also opened his door after he heard about the book that ‘Toby’ planned to publish and told him: ‘Israel is racist and fascist, it will be isolated like South Africa.’ Rajoub’s close confidantes whispered to Tenenbaum ‘We are all German, but the only problem is that we know that General Rommel did not succeed in coming here.’

“Tenenbaum’s book Catch the Jew will be published this week, and he will then not be accepted as a prodigal son in the Palestinian Authority once his cover is blown, the narrator of the video report said, summing up.

“In response, Yad Vashem said in a statement that, ‘Yad Vashem is careful that the subject of the Holocaust will be presented in detachment from any political agenda. Itamar Shapira was employed in the past as a guide in Yad Vashem and was not careful about these norms, and therefore it was decided about five years ago to terminate him [after he had worked there for three and a half years! CiJ]. Today, we allow outside guides, but we are considering changing this policy.'”

For their part, B’Tselem said that they condemn “any expression of anti-Semitism and Holocaust denial. The matter will be clarified with the investigator with the full necessary seriousness.” Journalist Gideon Levy added: “I traveled to the territories a number of times over the course of the years with Atef Abu Rob. I never conducted political discussions with him and I am not aware of his views. I very much hope that Holocaust denial is not one of them.”