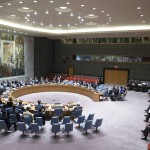 The UN Security Council has called for “an immediate and unconditional humanitarian ceasefire” in the Gaza war between Israel and Hamas at an emergency meeting.

The council met just after midnight this morning as Muslims started celebrating the Eid al-Fitr holiday marking the end of the fasting month of Ramadan.

The pressure for a ceasefire followed new attacks launched by Israel and Hamas on Sunday despite going back and forth over proposals for another temporary halt to nearly three weeks of fighting.

A 12-hour lull on Shabbos, agreed to by both sides following intense US and UN mediation efforts, could not be sustained.

An unofficial, partial truce is being observed by Israel in the Gaza Strip today, Israeli military sources said. A military spokeswoman in Tel Aviv confirmed that the air force wass not carrying air strikes. But Israeli ground troops continue to search for and destroy tunnels in Gaza’s eastern border areas.

The Security Council statement urged Israel and Hamas “to accept and fully implement the humanitarian ceasefire into the Eid period and beyond.” It said this would allow for the delivery of urgently needed assistance.

The presidential statement also called on the parties “to engage in efforts to achieve a durable and fully respected ceasefire, based on the Egyptian initiative.”

The Security Council statement was drafted by Jordan, the Arab representative on the UN’s most powerful body. Presidential statements become part of the council’s official record and must be approved at a council meeting. They are a step below Security Council resolutions, but unlike resolutions they require approval of all 15 members.

The statement never names either Israel or Hamas. Instead, it expresses “grave concern regarding the deterioration in the situation as a result of the crisis related to Gaza and the loss of civilian lives and casualties.”

The statement calls for “full respect” for international humanitarian law and reiterates “the need to take appropriate steps to ensure the safety and well-being of civilians and their protection.”

The statement also commends efforts by Ban Ki-moon, UN secretary-general, and John Kerry, US secretary of state, to achieve a ceasefire. Ban is scheduled to address UN correspondents this morning on his mission.