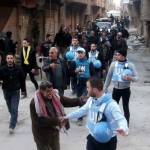 Forty-three United Nations peacekeepers were captured by the al Qaeda-linked Al-Nusra Front in Syria on Thursday. The seizure happened during fighting on the Syrian side of the Golan Heights between armed militants and the Syrian forces. Another 81 peacekeepers are trapped as a result of the fighting.

“The United Nations is making every effort to secure the release of the detained peacekeepers, and to restore the full freedom of movement of the Force throughout its area of operation,” the UN said. There are 1,200 peacekeepers from six countries working in the UN Disengagement Observer Force in that region. Read more at CBS News.