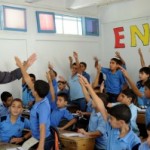 A third cache of Hamas rockets was found in a U.N. school in Gaza on Tuesday, the United Nations aid agency for Palestinian refugees reported. The United Nations condemned the stockpile, calling it a “flagrant violation of neutrality of our premises.”

The school was not currently in use as a shelter and the weapons have not yet been removed due to nearby fighting, the agency wrote in a report.

Israeli officials have accused the U.N. of handing back the last two unearthed weapons depots to Hamas, which in turn has used them against Israel.

Meanwhile, Hamas’s military leader rejected a new ceasefire, saying the group would not stop fighting until the siege of Gaza was lifted. Read more.