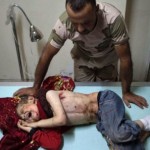 A U.N. source said that it was estimated that it could take up to three weeks to evaluate the U.N. inspectors’ findings from Syria, according to Arutz 7.  The lab test and other findings are designed to determine if chemical weapons were used against the civilian Syrian population in the attack which took place a week and a half ago.

This past weekend, a delegation of U.N. inspectors who were in Syria to determine chemical weapons use returned to The Hague, in the Netherlands.