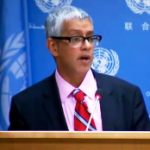 The United Nations fired some of its staff over social media posts the organization said violated its rules, including for antisemitism and racism.

After a U.N. spokesperson, Farhan Haq, parried a series of questions concerning antisemitic social media posts by some of the employees at the U.N. relief agency for Palestinian refugees, UNRWA, the U.N. acknowledged later in the transcription of the press briefing that “Some allegations have found to be authentic, others not.”

In its clarification, the U.N. said it was “working closely with Facebook’s legal team” to remove postings in violation of its social media rules. “These postings have been removed and the staff have been subject to both remedial and disciplinary action, including suspension and loss of pay.”

At the same time, the U.N. said some 90 imposter or otherwise unauthorized Facebook pages had also been removed, in which the alleged “UNRWA staff” either never had been or were no longer with UNRWA at all.

The U.N. also said it was continuing to investigate other such allegations.

The clarification came after Geneva-based UN Watch submitted a report exposing about a dozen alleged U.N. employees posting incendiary antisemitic content to their Facebook pages, and called for their dismissal.