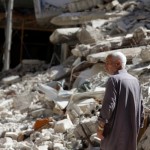 The number of people killed in Syria’s civil war from March 2011 to April 2014 is now at least 191,000, the UN says. That number is more than double the estimate of 92,901 deaths the organization counted in its last report which covered the first two years.

“Tragically, it is probably an underestimate of the real total number of people killed during the first three years of this murderous conflict,” said Navi Pillay of the UN Human Rights Data Analysis Group. The report did not include roughly 52,000 deaths that have been recorded but could not be verified. Read more at The New York Times.