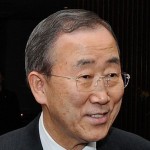 The United Nations Secretary-General Ban Ki-moon on Monday condemned the rocket fire from Lebanon on northern Israel. The attack was meant to avenge the assassination of terrorist Samir Kuntar in Syria which has been blamed an Israeli airstrike.

Ban said that he is “greatly concerned over yesterday’s firing of rockets within UNIFIL’s area of operations from the area of Al-Hinniyah, in the vicinity of Tyr, towards Israel, which is a serious violation of resolution 1701 (2006).”

Three rockets were fired from Lebanon into northern Israel and the Israel Defense Forces sent the Israeli Air Force into southern Lebanon in response for the attack.

The United Nations Interim Force in Lebanon (UNIFIL) is investigating the incident along with the Lebanese Armed Forces and the Israel Defense Forces, Ban said in a statement.