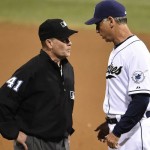 According to a new study, Major League Baseball’s expanded strike zone and umpires are to blame for plummeting scores. The average runs scored per game is now at 4.07, down from 4.17 last year, and down from 5.14 in 2000. However, the umpires aren’t just calling more strikes.

The rate of correct strike calls has increased 9 percent from 2007 to 2013, and the correct ball rate has increased 26.3 percent. Lower strikes (the ones by the batter’s knees) are being called more often, and those are some of the most difficult.

“As a result, we see pitchers throwing low in the zone more often,” said Brian Mills, the assistant professor at University of Florida who wrote the study. Read more at the Wall Street Journal.