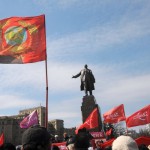 According to a pro-Russian rebel leader in eastern Ukraine, between 3,000 and 4,000 Russians have joined the separatist ranks. Those Russians are either former service members or current military personnel on leave, he said. Experts now put the number of Russian troops fighting in Ukraine at over 10,000.

The admission comes as rebels take the town of Novoazovsk, which connects Russia and Crimea, in southeastern Ukraine. In addition, a Ukrainian official on Thursday claimed that two columns of Russian tanks fired missiles at a border post in southeastern Ukraine, then moved into the country as Ukraine’s border guards ran. As a result, Ukrainian President Petro Poroshenko has canceled a visit to Turkey and said Russia has now deployed troops in his country.

This is not the first time rebels have bragged about Russian troops and weapons. Read more.