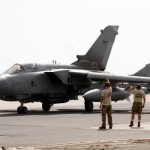 Britain’s Ministry of Defense confirmed that the Tornado jets, which took off from RAF Akrotiri in Cyprus, were “ready to use in an attack role as and when appropriate targets are identified.”

RAF Tornados have flown reconnaissance missions over Iraq for the past six weeks, but Shabbos marked the first time they’ve flown since receiving authorization for air strikes. The jets are equipped with laser-guided bombs and missiles. Read more at BBC News.