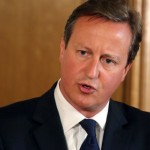 In response to growing concerns about British citizens leaving the country to fight for ISIS, UK police are set to be allowed to seize the passports of suspected terrorists and stop British jihadists from returning home for a certain period. On Friday, UK’s terror alert was raised from “substantial” to “severe.”

Prime Minister David Cameron said today that it was “abhorrent” that British citizens “declared their allegiance” to the Islamist extremist terrorist group. Liberal Democrats have opposed the new measures and claim they would be a violation of international law. Read more at BBC.com.