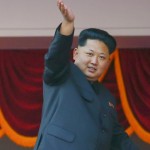 The U.S. Military used a Christian NGO to spy on North Korea, according to an investigation by The Intercept.

Unwitting NGO employees were then used to transport the equipment around the country. Read more at The Intercept.