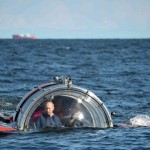 American intelligence officials are wary of a new Russian underwater presence near vital communications cables that allow near-instant interaction with the world. Officials say there’s increased activity around the cables, which carry both diplomatic and civilian messages, in the North Sea and there are fears that Russia might sever them in hard-to-access locations.

“It would be a concern to hear any country was tampering with communication cables; however, due to the classified nature of submarine operations, we do not discuss specifics,” a Navy spokesman told The New York Times. Read more at The New York Times.