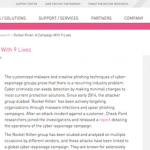 After informing computer security teams who notified police in the U.K., Germany, and the Netherlands of the locations of servers used to launch attacks from Iran, a raid at those locations has apparently ensued, according to Reuters.