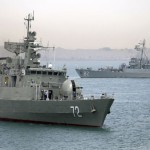 A U.S. military official accused Iranian naval vessels of carrying out rocket tests near U.S. warships last week in the Strait of Hormuz.

Raines said the rockets were fired near commercial traffic passing through the stretch between Iran and Oman. The move follows a series of weapons tests after the summer’s landmark nuclear deal between Tehran and Western powers.

Raines added that the Iranian vessels warned they were conducting the tests only 23 minutes before launching the rockets. NBC News first reported news of the rocket tests, citing two military officials. Read more.