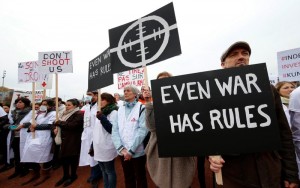 An internal investigation of the U.S. attack on a hospital in Afghanistan last month reveals it took commanders 17 minutes to tell an attack aircraft it was firing on a Doctors Without Borders facility. Thirty people were killed and 37 injured after a AC-130 gunship fired on the hospital for a half hour, supposedly mistaking it for a Taliban garrison.

Gen. John Campbell said Wednesday that a special forces officer received a call from MSF (the French abbreviation for the medical organization) saying the U.S. was bombing a hospital.

“It took the headquarters and the US special operations commander until 2:37 a.m. to realize the fatal mistake,” Campbell said, adding this was “human error.” MSF calls it a war crime.

The Associated Press reported in October that U.S. special operators were tracking a Pakistani intelligence operative, whom they believed was working with the Taliban, to the hospital; U.S. soldiers knew it was a hospital before they called in the airstrike, though it’s unclear if they told higher-ups it was a hospital. Read more at The Guardian.