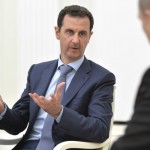 The communications reportedly explored ways to boost a potential military coup that year as the civil war began, the Journal said.

The Obama administration allegedly moved away from the meetings and trying to influence Syria in 2012 and instead supported Syrian rebels.

The paper reported that officials sent messages through Russia and Iran or spoke directly to each other during the communications. Read more at Yahoo News.