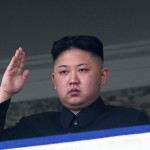 The U.S. flew a B-52 bomber as a show of force over South Korea days after North Korea claimed to have conducted a hydrogen bomb test. ”

This was a demonstration of the ironclad U.S. commitment to our allies in South Korea, in Japan, and to the defense of the American homeland,” Adm. Harry B. Harris Jr., commander U.S. Pacific Command said in a statement to NBC News.

The last time this sort of flight happened in the region was in March of 2013, shortly after North Korea’s last nuclear test. Read more at NBC News.