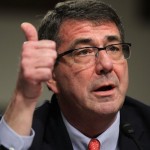 Moments after visiting Israeli Defense Minister Moshe Ya’alon departed the Pentagon for home,  Jeffrey Goldberg of The Atlantic met with U.S. Secretary of Defense Ashton Carter to discuss the U.S.-Israel relationship, and also the broader challenges facing the U.S. in Israel’s neighborhood.

“State collapse in the Middle East is the phenomenon of our time,” he said.

Carter said that Ya’alon’s visit, and a visit he made to Israel this past July, were meant to place the Iran disagreement in a broader context.

“My being there was to basically say, ‘Look, you see this differently from us – we think it’s a good deal and you have said it’s a bad deal and I understand your reasoning there – but there is still a lot that we agree on and can work together on. We have to move on to the business we have in common and that means, specifically with respect to Iran, working together to counter their other malign activities in the region, which are just as worrying to us as they are to Israel, and to monitor the implementation of the agreement.'”

Officials in Yerushalayim and Washington tell Goldberg that Netanyahu gets along with Carter better than most anyone in the Obama administration, with the possible exception of Vice President Joe Biden.

Carter noted: “It turned out that he [Netanyahu] and I went to rival high schools outside of Philadelphia.”

Carter was generous in praising Israeli military innovation, and crediting Israel with aiding in America’s defense. “It’s a two-way relationship,” he said. “We really do get things from the Israelis in technology.”

He cited as an example work to counter the devastating impact of improvised explosive devices (IEDs).

“The Israelis were really quite ingenious in this area and we got a lot from them. There’s no question that lives were saved as a consequence of their [help].”