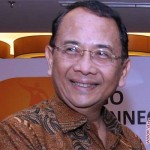 The United Nations Human Rights Council’s (UNHRC) special investigator for the disputed Palestinian territories, Makarim Wibisono, announced his resignation on Monday, citing Israel’s refusal to grant him access to the West Bank and Gaza Strip as a factor in his decision.

In a statement announcing his resignation, Wibisono, an Indonesian diplomat, expressed “deep concern at the lack of effective protection of Palestinian victims of continuing human rights violations and violations of international humanitarian law.”

Wibisono replaced U.S. legal expert Richard Falk in 2014. Falk, who is Jewish, had promoted a boycott of Israel and endorsed 9/11 conspiracy theories.

Like Falk, Wibisono had expressed anti-Israel views. According to U.N. Watch, Wibisono accused Israel of “unconscionable use of force against the Palestinians,” “untenable acts of aggression,” and a “policy of retribution against the entire Palestinian nation.”

Israel has long accused the U.N. of anti-Israel bias and has rejected the world body’s post of an independent investigator for the Palestinian territories.

“The Israeli decision was the consequence of the distorted and biased mandate given to the rapporteur,” said Emmanuel Nahshon, a spokesman for the Israeli Foreign Ministry spokesman, Reuters reported.