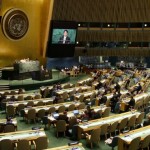 The United Nations on Tuesday called the wave of Palestinian terror attacks in recent months “unacceptable,” but criticized Israel for the “excessive use of force” in its self-defense against terrorism.

“The unacceptable wave of stabbings, shootings, and car-rammings continues to kill and injure Israelis,” said Cecile Pouilly, a spokeswoman for the U.N. Human Rights Office. “[But] the response from Israeli security forces has resulted in alleged attackers, protesters, and even bystanders being killed and injured.”

Pouilly’s comments mirror Sweden’s recent criticism of Israel. Swedish Foreign Minister Margot Wallstrom said this month that Israel has “the right to defend itself,” but that the response could not be “extrajudicial executions” or a reaction that was “disproportionate,” with the “number of dead on the other side greater than the original death toll by several factors.”

On Tuesday, Pouilly said that “all instances of the use of force resulting in death or injury by law enforcement officers should be the subject of prompt, independent, and impartial investigations.”

The U.N. has been known for its disproportionate amount of resolutions criticizing Israel over time.