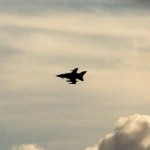 British fighter jets took off from an RAF airbase in Cyprus and carried out airstrikes in Syria, just hours after lawmaker voted in favor of launching airstrikes against ISIS targets in the war-torn country, the Ministry of Defense confirmed early Thursday.