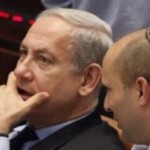 Israel’s new deputy foreign minister, Tzipi Hotovely, said in an address to the Jewish state’s diplomatic core that all of the land of Israel belongs to the Jewish people.

“Many times it seems that in our international relations, more than emphasizing the rightness of our cause, we are asked to use arguments that play well diplomatically,” she said in a broadcast to Israel’s 106 diplomats serving abroad. “But at a time when the very existence of Israel is being called into question, it is important to be right.”

Hotovely, who is the highest-ranking official at the Israeli Foreign Ministry due to the fact that Israeli Prime Minister Bibi Netanyahu did not appoint a foreign minister, spoke of the need to return to the “basic truth” about who controls the land.

“The international community deals with considerations of justice and morality,” she said. “We need to return to the basic truth of our right to this land.”

Hotovely ended her address by quoting Rashi, who described how Hashem gave the land of Israel to the Jewish people.

“Rashi says the Torah opens with the story of the creation of the world so that if the nations of the world come and tell you that you are occupiers, you must respond that all of the land belonged to the creator of world and when he wanted to, he took from them and gave to us,” she said.