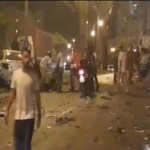 Magen David Adom paramedics treated the two victims, who had sustained injuries in their legs and arms. They were later evacuated to Barzilai Hospital in Ashkelon. Two bystanders were treated for anxiety.

Following the explosion, large police forces were called to the scene. They estimate that an explosive charge had been planted inside the vehicle following an argument between criminals in the city.

The loud explosion startled many residents who gathered around the vehicle shortly after the incident. They initially thought the explosion may be a terror attack, but the police immediately ruled out that possibility.